This article was originally published on venturebeat.com on September 23rd, 2017

New data, from a study done by my team at Bunch, could redefine what we see as the trademark characteristics of early startup success. Our study collected data from 62 early-stage startups over the course of a year to find the factors that correlate directly to higher revenues. And what we found was pretty surprising: A lower committment to goals actually resulted in better financial performance. And a high growth mindset didn’t necessarily mean higher revenues.

Before I dig into the results, a quick note on how we conducted the study: We used a team assessment (that was based on a thorough study of more than 150 papers detailing significant predictors of team performance). This assessment measured not only personality traits, but team health factors (i.e. quality of teamwork), motivational factors (i.e. psychological resilience), and values (i.e. ambition, security, etc.) of team members.

Here’s what we found:

What we found here is that a consistency of mindset across an organization is more important to financial success than a high-growth mindset. For instance, when it comes to aligned growth mindset, if you all agree you’re going to achieve world domination, that’s great. If you all agree you’re going to create the world’s best template for greeting cards, that’s also great. But decreased financial success comes from combining the world-dominators with the greeting card dominators. Attempting to balance mindsets on both ends of the spectrum clearly isn’t effective.

Elon Musk demonstrated the importance of a uniform mindset in a letter he wrote to employees (in response to threats of strikes) explicitly laying out Tesla’s vision. The letter makes it feel as though the vision belongs to each team member equally. In it, Musk reinforces the importance of an aligned culture by closing with: “I look forward to what we can create as a tightly integrated team together.”

If you want to access the growth potential in these findings yourself, you can try making discussion of scale, company growth, and vision a part of all-team meetings, one-on-ones, and even the hiring process. When you inevitably find discrepancies (i.e. misalignment), work to establish a middle-ground that you, as a team, can commit to, rather than attempting to convert one person to another’s view. Remember: a team aligned behind one modest vision is proven to be more successful over time than a team pulling in all different directions, regardless of how ambitious those directions may be. 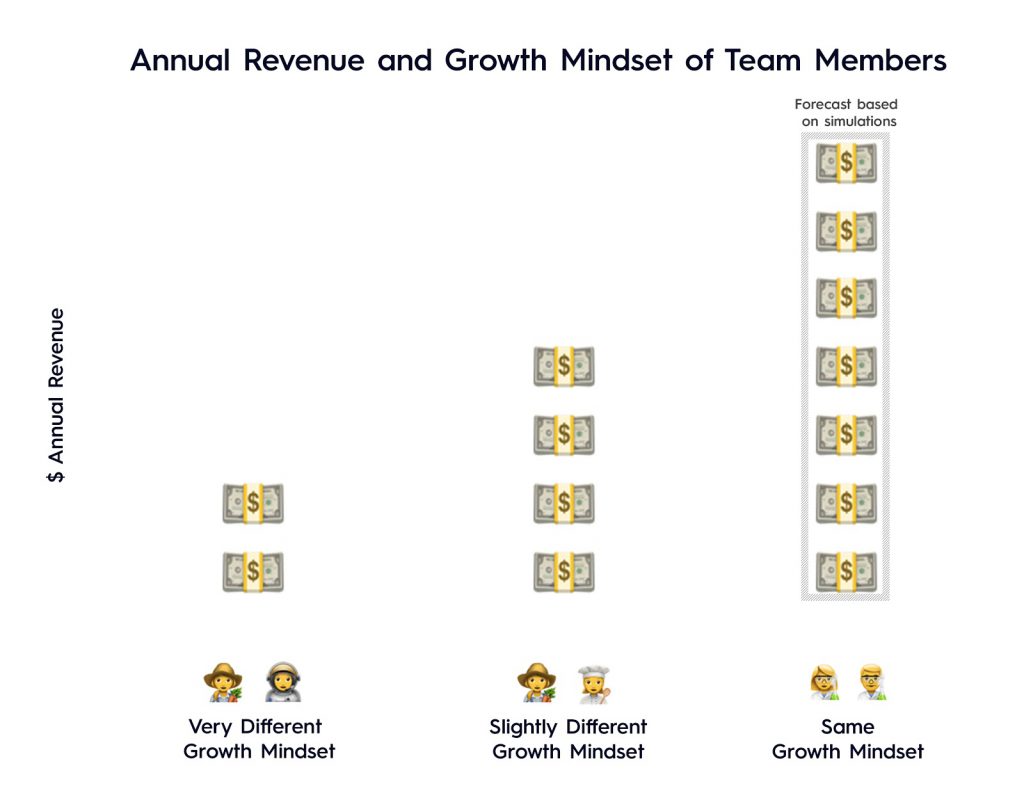 Second, our study found that low goal commitment corresponds to increased revenues. Sound counter-intuitive? Well, in early-stage startups, being goal-oriented can mean sacrificing adaptability. For example, the desire to check items off a to-do list can enable procrastination on, or merely distract from, more pressing tasks and issues. Being too narrowly focused on goals can be detrimental to an early stage startup, which may need to change course several times in its first few months to reach product-market-fit. (Did you know Twitter was supposed to be a podcasting company? Imagine if they had stuck to that goal!) So don’t feel bad about failing to close a particular deal if an even bigger opportunity presents itself halfway through the week and demands most of your attention. 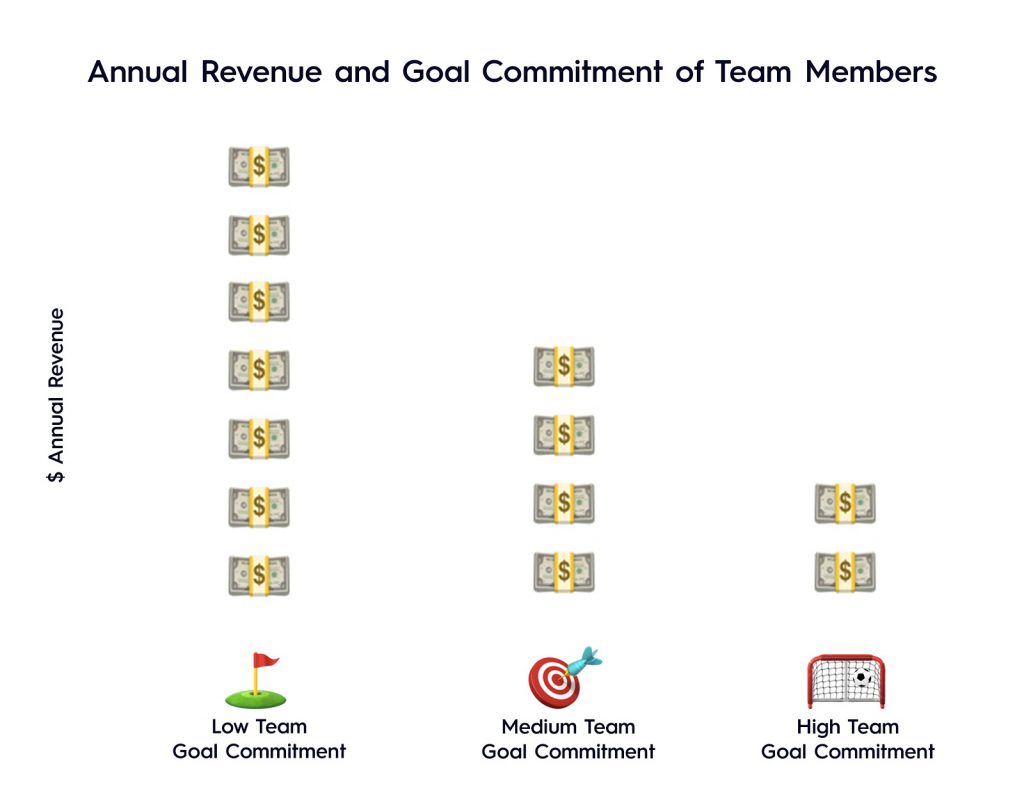 The third surprise in our data was the clear value that comes from a balance of team support behavior. This means it pays to have some team members who do support their peers and others who do not actively deliver this support. This does actually make sense in the context of growth. A startup of three people is going to be, out of sheer necessity, in a near-constant state of support and communication because there are only three people to do the work of the entire company. However, at Bunch, a slightly larger startup, some of our team members act as links between teams (i.e. product managers) and others are more independent (i.e. sales reps). So, some can use their skills of support to communicate, connecting the team, while others can focus on their deliverables and execute at full-speed. 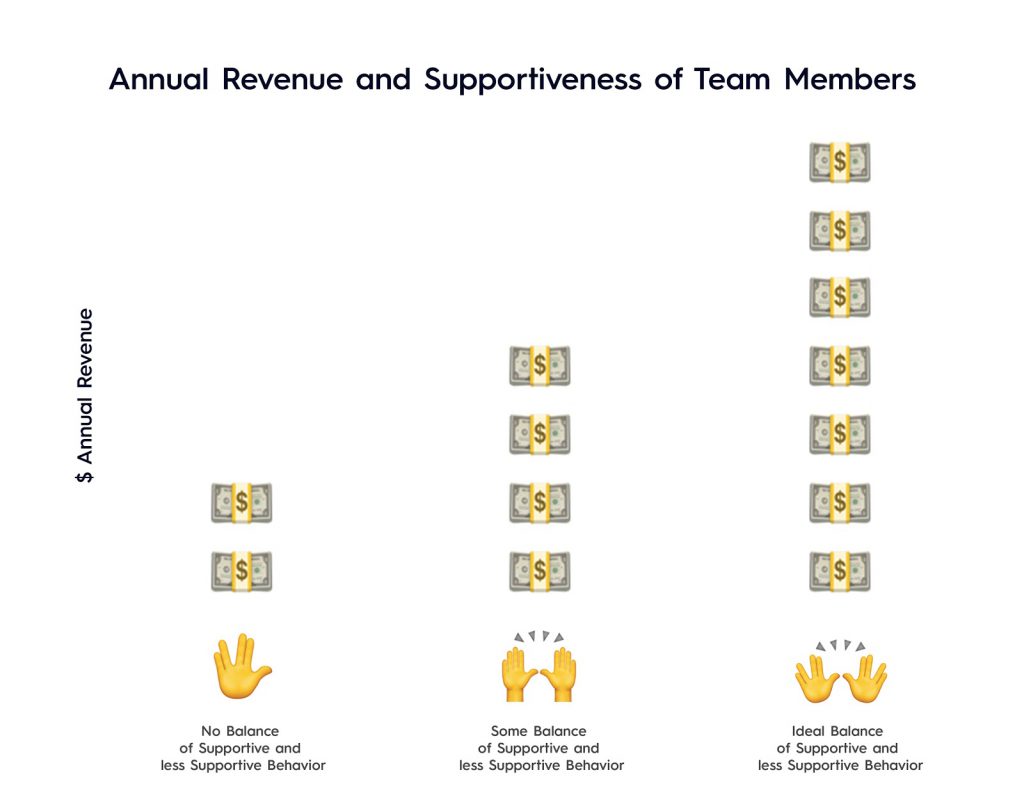 Our final data surprise was the data on flexibility vs. structure. The findings here support those mentioned above about low goal commitment. Essentially, there must be a balance between structure and adaptability. This means that, ideally, some team members will need a lot of context and direction, and some will go with the flow and figure things out as they go it alone. In other words, you need employees who accept the value of a clear and well-structured directive, but you also need people who accept there will never be perfect information and can take a leap of faith and go for something without feeling entirely prepared. Keep this in mind as you scale your company by involving team members who need and thus create more structure as you grow and team members who just jump right into and take advantage of opportunities quickly. 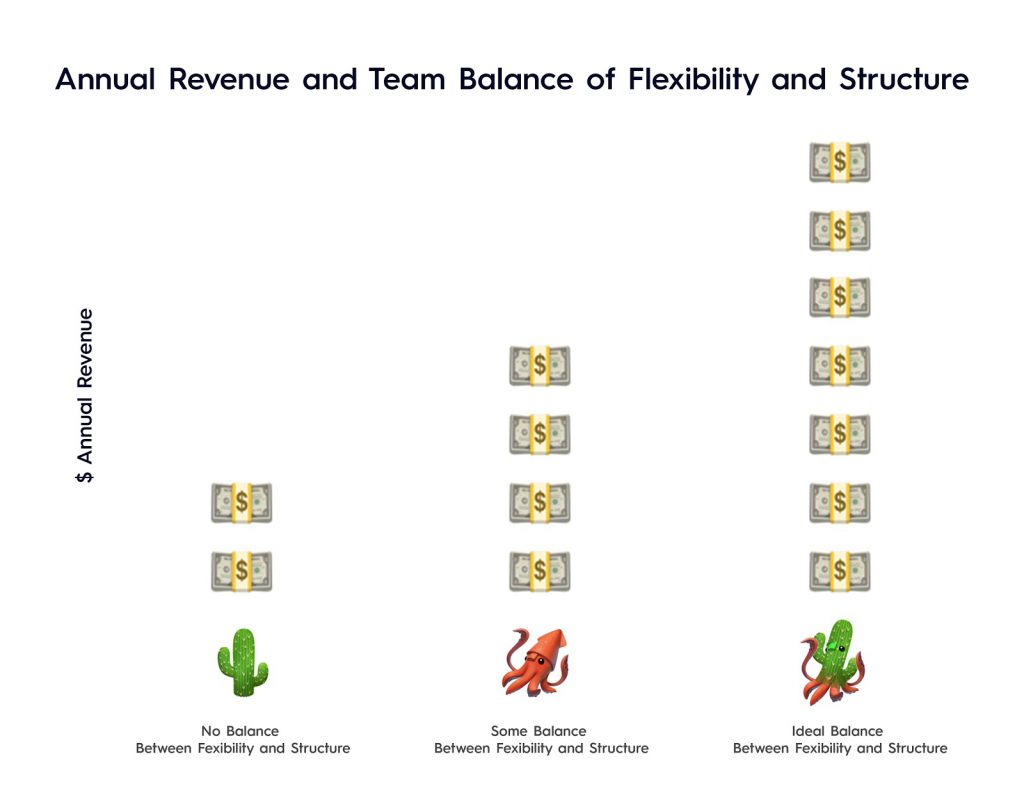 Why we love culture hacking